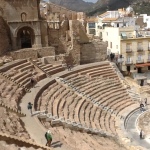 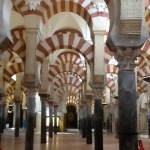 Me and My friend Maimonides in Córdoba

Display on the Inquisition in the Sephardic museum, Cordoba. I wonder if the KKK fashioned their garb on this get-up.

Cartagena has been an important strategic location throughout history — for the Romans, then under Muslim rule, and more recently during the Spanish Civil War.

This Roman theatre is considered one the finest examples in the world. We also toured its museum of Roman antiquities, a castle, the Shelter Museum of the Spanish Civil War, and walked the lovely walking promenade of shops (including an Apple Store where I got free Wifi and could post yesterday’s blog), and saw street performers like this guy (gal?) above.

It was a day of lost-and-found. We were both just so exhausted from all we’ve been doing, and I’d only gotten 3 hours of sleep the night before. Julie thought she lost her credit card and bank card and went running back to the ship to see if she’d possibly left it in our room-safe. If not, she was going to have to call her husband in the US to cancel the credit card. Shortly thereafter, I found the cards under the seat where we were seated at a cafe and went running after her. Later in the day I went to the front desk of the ship, having misplaced my neck pillow (just purchased in Hawaii) when checking onboard on Sunday. And they had it!

In the meantime, I’ve been trying to work out the details of the Seder with the activities director and dining staff. They actually are preparing everything: gefilte fish, charoset, chicken soup, potato kugel, Empire kosher chicken, matza, macaroons! I’ve always been impressed by Holland America in this regard on all my previous trips — having served twice for Rosh Hashanah and once for Chanukah). They have had all of the necessary ritual objects : prayer books, yarmulkes, kosher wine, electric candlesticks and chanukiah and have prepared traditional foods (challah for Shabbat and a round one with raisins plus apples and honey for Rosh Hashanah, latkes for Chanukah, and that amazing Chinese buffet — plus movie — for the Jewish guests on Christmas Day!) And now a full Seder!

Yesterday our boat docked in Malaga. It was pouring! We took a taxi from the boat to the train station and took a train to Córdoba. Fortunately it wasn’t pouring once we got there (though “the rain in Spain lies mainly on the plain” was thereby disproven). However, later on while eating in a Sephardic restaurant (where I experienced some of the most exquisite flavors of my life, including a gazpacho of orange, ginger, rose tea, and dried flowers), it actually hailed!

We toured La Mezquita, both a mosque and church, — whoa, beautiful! — the Juderia (Jewish quarter) — including an old synagogue (from 1315, recently restored) and a Sephardic Jewish museum, in addition to visiting a museum in a tower that featured the relationship of Jews, Christians, and Muslims. Learned lots, and loved all the Maimonides history. He was born in Córdoba. (When in Morocco 2 years ago, I had seen his home in Fez, where he lived after Spain.)

Today we are in Gibraltar, but I’ll have to post about that tomorrow from Seville. Lots if Internet troubles, I’m afraid. Ciao!

One thought on “Cartagena and Cordoba”