Sunday morning, Laura, Julie and I met Dina, our Israeli guide, who took us on a private tour of the Gothic quarter of Barcelona, with a focus on the Jewish history there.

We met Dina in this square where the municipal buildings are. The progressive female mayor has this sign (“Refugees Welcome”)  over the entrance of her headquarters. Brava!

At one point of the tour, I just broke down in tears, as the overwhelming history  of Anti-Semitism overwhelmed me. Fully 1/4 of this whole area of narrow, winding streets was originally the Jewish quarter (called the Calle, as opposed to La Juderia, as it is called elsewhere in Spain) and there were 5 synagogues there. 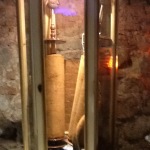 16th C. Torah scroll in the old synagogue we visited. The synagogue was excavated and restored by an Argentinian Jew.

However, Jews probably settled in Barcelona as earlier as Roman times in the 9th century! We also saw where the great Disputation of Barcelona between the great medieval Jewish commentator Nachmanides and his  Dominican accusers took place in 1263. It was a debate to prove whether Jesus was the true Messiah or not. Though you can guess who won, Nachmanides did not lose his life. Rather, King James of Aragon was so impressed by Nachmanides that he gave him money (300 gold coins!), said that he had never heard an “unjust cause so nobly defended,” and sent him packing. Nachmanides made his way to Jerusalem and founded a synagogue there. However, on the Shabbat just after the debate, King James visited the great synagogue in Barcelona (the one we visited), something unprecedented. What would have happened had the king actually intervened to say that Nachmanides HAD won the debate, as it seems he may have believed?

Three other famous Jews from Barcelona were Abraham bar Chiya – 11th C. astronomer and astrologer, some of whose scientific Hebrew words are still in use today; the Rashba – whose responsa can be found in the medieval Jewish code the Shulchan Arukh; and Hasdai Crescas, a medieval Jewish philosopher.

Hebrew inscription on a city wall. Apparently the Jewish cemetery was desecrated and these stones were used (“recycled” if you want to be generous). We saw several such stones with Hebrew inscriptions.

Jews were originally expelled from Barcelona in 1391. 70% of the Jews converted to Christianity, 300 were burned to death, and the rest escaped. The Catalon Synagogue in Rome, still in use today, was founded by some of these escaped Jews (Barcelona is in Catalonia, speaks Catalan as its official language, and has tried time and again to get its independence from Spain.) Those Jews who were left in 1492 at the time of the Inquisition were forced converts called Anusim (Marrano is a pejorative term). Dina also gave us some fascinating lore about Christopher Columbus and why there is speculation that he was Jewish (or more likely a forced convert) trying to escape the Inquisition, whose purpose it was to root out the “false” new Christians. 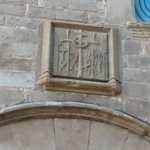 Inquisition Headquarters. For those who couldn’t read, the symbols of torture depicted on the overhead plaque made it clear.

Fourteen different haggadot were produced in Barcelona. 13 of the 14 recently were recently exhibited in Barcelona, and Dina thought the exhibit was now on tour. I hope it comes to New York! For those who read Geraldine Brooks’ novel “People of the Book,” you will get some history of the famous Sarajevo Haggadah. 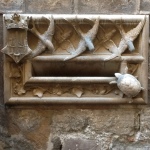 Here is another sign in symbols. If I told you it was on the entrance to the Lawyers’ Guild headquarters, can you guess what the birds and the turtle represent? 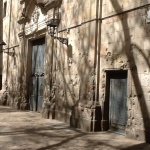 Bullet holes in Barcelona from the Spanish Civil War

After our wonderful tour, Julie and I picked up our luggage from Laura’s honeymoon palace and headed directly to the port, where we boarded the Eurodam ship of the Holland America line. This is my 4th cruise with them (2 previous trips to Alaska and one to Australia/New Zealand). We are 2 of the over 2900 passengers (a number which includes 850 service crew!)

Yesterday we debarked in Valencia and took it somewhat easy on the touring front (though Julie still has us logged in at over 12 miles, after we danced the night away until the wee hours. I am determined not to be one of the cruise statistics about gaining at least a pound a day on a cruise!

Great doors and graffiti in Valencia!

Julie and me in our gala garb for dinner, after which we danced and danced. I bought the dress for 6 euros (8 dollars) in Valencia’s Central Market

Today we are in Cartegena, with amazing Roman ruins and a fascinating Spanish Civil War Museum. I will post pictures tomorrow.

One thought on “Jewish Barcelona, the Eurodam, and Valencia”