This was another long and wonderful day of touring and learning. On our long drive to Meknes from Fez this morning, one of our two guides (one is a secular non-Moroccan Israeli Jew and the other a Moroccan Muslim) gave us a wonderful history of the belief held by Moroccan Jews in the intervening power of the deceased tzaddikim/holy ones to whom they pray. (That is an interesting conversation for another time.)

Meknes, located on a fertile plain north of the Middle Atlas, was the most fortified city in Morocco and was the home of King Moulay Ismail in the 17th century, a long-lasting king who served on the throne for almost 50 years. He used black Africans as slaves and soldiers, maintained a calvary of 12,000 horses, and turned a blind eye to Moroccan piracy, since he was the beneficiary of the captives (mostly white) on-board the pirated ships. When ambassadors would come from the Vatican or other countries to ransom their citizens, he benefited from their payments. Some of the prisoners converted to Islam; today anyone whose last name is Allej (?) is known to have Christian origins. On our tour today we saw his granaries, his stables, his dungeon, and his mausoleum. (The history of Morocco and piracy is quite interesting. It actually plays into the Moroccan belief that they are the first nation to have recognized the newly-formed United States of America in 1776.) 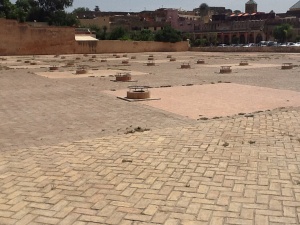 Above ground air/light holes for dungeon

Today we also visited the old Mellach (Jewish quarter) in Meknes, in which there used to be 20-50,000 Jews; now there are 50 total Jews, only 4 families live in the old Mellach area. We visited the now-defunct synagogue in the Mellach as well as the 700-year-old Jewish cemetery. I had a good cry at the conclusion of that visit when the caretaker led us in the Mourners’ Kaddish prayer for all those buried in the cemetery who no longer had anyone to remember and say Kaddish for them. 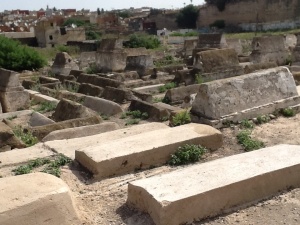 After a visit to the market in Meknes, where the spices and olives were gorgeously displayed, we left for Rabat to visit the mausoleum (considered an architectural gem) of King Mohammed V, the first king of independent Morocco, considered the father of the nation. He was put on the throne by the French in 1927, though he was not the legitimate heir to the throne, and served until 1953. He was exiled by the French from 1953-5 for not condemning the independence movement. His uncle was placed on the throne in his stead. Mohammed V was again recognized as sultan upon his return from exile, protested against the French protectorate, achieved independence from France in 1956, and ruled again as king from 1957 until his death in 1961. He was initially buried in the royal palace in Rabat, and was re-interred in this mausoleum when it was completed ten years later. While his tomb is in the center, in the back you will see the tombs of his two sons King Hassan II (who ruled from 1961-1999) and Prince Abdallah.

For those who caught the article last Saturday, May 10 in the New York Times entitled “Rebel Prince Shines a Harsh Light on Morocco,” you will note that the deceased Prince Abdallah’s son, Prince Moulay Hicham el Alaoui, is a harsh critic of his cousin, the current king of Morocco.

This evening we met with Matt Lussenhop, the acting US Embassy Deputy in Morocco, for a very enlightening session. He noted the many positive changes he’s seen in Morocco since his first stint here from 1997-2000 — from better infrastructure to civil rights to better economic opportunities for its citizens. On the prince’s article in the New York Times, he said that previous interviews with him in Le Monde used to be banned here, but are no longer. There is a more tolerant view of dissent.

The deputy ambassador considers Morocco an important US ally and a good American partner. The king met with President Obama in November in the US, and Secretary of State Kerry visited Morocco just last month. The depth of the relationship is in the following areas:

1. Supporting economic and political reform in Morocco, such as women’s and migrant rights. All of this has been accelerated since the Arab Spring.

2. Military/security/counter-intelligence. Morocco is open to information-sharing and cooperation, and there are joint military operations.

3. Finding opportunities for American business and creating business ties between the two nations. (Morocco is one of the few Middle Eastern countries with which the US has a free-trade agreement.)

4. Cultural and educational exchanges. Many US students are now coming to Morocco for their Arabic studies rather than to Cairo as they would have done 5 years ago; and Moroccans come to the US for schooling, as well.

On the question of relations with Israel, the deputy ambassador said that this king’s father, King Hassan II, was more international in outlook and had relations with Israel, seeing himself as a player in the Arab-Israeli conflict. However, this current king, Mohammed VI, is more inner-focussed on the problems of Morocco and the saying here is “Taza (referring to a poor city in Morocco) not Gaza.”

It is now midnight here and again, I’m not sure I will be able to download photos to the blog. If I am, I would love to include a photo of a strange looking hamsa, often found sideways like this on doors, called here in Morocco “the hand of Fatima.” (Fatima was the Prophet Mohammed’s daughter.) As many of you know, I love hamsas, and have already bought myself some memorable examples to bring home with me.

Hamsa, believe it or not