If I was excited by our adventures in Volubilis yesterday, that didn’t come close to the thrill of our touring day in Fez today. This is a magnificent city, rich in history and teeming with life. Once considered a political center, it is now more the artistic, spiritual and intellectual center of Morocco. Fez is home to the University of Al-Karaouine (Al Qarawiyyin), considered the oldest continuously operating academic degree-granting university in the world. Did you know that?

The full tour started with glimpse of the American Fondouk, a refuge and charitable veterinary clinic for pack animals, thanks to the generous gift of an American named Amy Bend Bishop who was horrified by the care of the animals when she visited Morocco in the 1920’s. We then took in a panaromic view of the Medina (old city) of Fez from a 16th century fortress called Borj Sud, before descending to the city and visiting the Mellah (old Jewish quarter) of Fez.

Here I am (neither preaching nor singing) on the pulpit of the Ibn Danan Synagogue, a restored ancient synagogue. We also visited the Jewish cemetery.

You will note that here, as on the Mount of Olives in Jerusalem (I believe I spoke about this in January 2013 in the “Nerves, Graves and Scrabble” post) that it is common for these above-ground gravesites to include an enclosed hole in which to burn yahrzeit candles on the anniversary of the death. For some of the more famous rabbis buried in the cemetery, a larger oven and chimney is provided, since these candles are burned not only on the yahrzeits/anniversaries, but also on Fridays and other special occasions. In this cemetery one of those larger ovens is provided at the tomb and pilgrimage site of Lalla Soleike, a Jewish woman martyr. The Road to Fez by Ruth Knafo Setton, one of the books I read before coming to Morocco, first introduced me to this legendary woman, believed to have martyred herself rather than convert to Islam to be married to the Sultan.

Much of our afternoon was spent walking in the ancient walled city of the Medina (some parts dating from the 9th century, some from the 14th), the largest marketplace/souk in the world in which cars are not allowed. For those who have walked the winding alleyways of the Old City of Jerusalem, that is a piece of cake compared to this Medina. Here we saw the breathtakingly gorgeous Madrasa Bou Inania, founded in the 14th century, one of the few religious places in Morocco that is accessible to non-Islamic visitors; the presumed home of the great Jewish scholar Moses Maimonides, who lived in Fez for ten years until he was 25; the Museum of Wooden Arts; and many artisans at work — metalworkers, tanners, weavers, and potters — each an expert in his craft. In Morocco, the agave plant is used to make silk. Here are some pictures of the crafts and craftspeople at work. 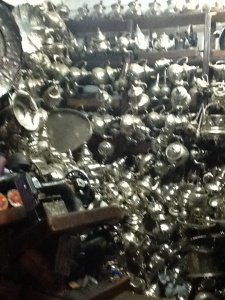 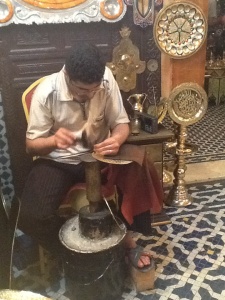 I came back to a lovely swim at our hotel, an old palace, and an outdoor dinner on the terrace with live Arabic music and the call of the muezzin in the background. It was like heaven.

I am also including a picture of the daily French government newspaper, Le Matin. Take note that in keeping with the new Moroccan Constitution which I mentioned in an earlier post, the dates on the paper include the Hebrew date (14th of Iyar) as well as the date in Berber, Arabic, and Gregorian. For a country with so few Jews left, this is quite amazing. (BTW, we were told that the new Constitution was inspired by the Arab Spring.)

We leave in the morning for Meknes and then Rabat (redux).

(PS Again it seems that I am unable to download photos into my post. Hopefully, I will be able to do so tomorrow night from our new hotel. If it has to wait until I return to the US, I will update the posts then with the photos and you can find them all by going to http://www.paminjerusalem.com.)

One thought on “Phenomenal Fez — Discipline in Humility”