My heart is in the east and I in the west of the west: so how
Can I savor sweetness, taste any food, or even call it mine?
How can I make good my vows, my pledge, with Zion now
Held by the crusades of Edom, and me in Arabian chains?
The burden would be light to leave behind all ease of Spain
To see that mighty light, the simple dust of our Ruined Shrine.

My Body is in the East, My Heart in the Extreme West

The land knows where the clouds come

from and whence the hot wind

Where hatred and whence love.

But its inhabitants are confused, their

heart is in the East

And their body in the far West

Like migratory birds who lost their summer and winter,

Lost in the beginning and the end, and

To the end of pain all their days. 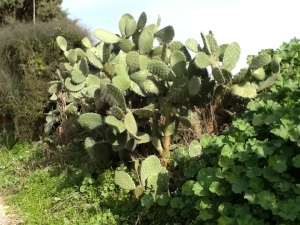 Native-born Israelis are called Sabras, for this cactus that is prickly on the outside and soft on the inside

I know that our friends Nancy and Mark have been reading this blog. We spent New Year’s Eve with them a year ago, and when they told us that they were thinking of making aliyah/moving to Israel, I (basically) said, “WHAT?! Are you CRAZY?”

Let me eat my words now. It is not crazy at all.

For a moment, leave aside the socio-economic and political realities and difficulties of Israel. Imagine instead what it means for a practicing Jew, living as a minority wherever you live in the Diaspora, of coming to a place that reeks of things Jewish, that revolves around the Jewish calendar, whose very street names remind us daily of our centuries-old history. Even a secular Jew lives a Jewish life in Israel. Shabbat is not just another day — the whole week revolves around it.

Or think of those Jews who came to Israel not for spiritual/religious reasons, but for sanctuary. I think of Malka, my kibbutz roommate. She was then a 16-year old girl from Ethiopia who had trekked through the Sudan to make it to Israel, leaving behind her family for a better life — for life itself. She cried herself to sleep every night, and I didn’t know how to help her. I just knew that while I was on kibbutz to learn Hebrew and return to college in the U.S., she was on kibbutz to learn Hebrew and make a new life in Israel as best she could.

When I lived on that kibbutz in 1981, I was pretty sure that I would make aliyah one day. What a high it was to run through the forest there, past the kibbutz cemetery, to reach the top of the mountain and view the entire Jezreel Valley stretched before me. Reading the Bible, knowing the ancient history that took place in that place, in those long-ago days, feeling part of a long chain of longing to be in that place, that historic land.

When I returned to the States after that stay, I stopped running. After graduating from college and moving to Santa Cruz, CA, I tried again, but the gorgeous beach along the Monterey Bay was no match for the mountains above the Jezreel Valley. It wasn’t the same high, connecting the physical with the geographical with the spiritual.

And then in 1982, the news of Sabra and Shatilla hit me with all its horror, and my illusions about Israel were punctured. I was in true crisis then, joined a writing/theatre group comprised of other disillusioned lovers of Israel, and wrote out my love, my pain, my longing. Our readers’ theatre group was a lifeline and also a hornet’s nest of dissension. There were members to the left of me who questioned the very existence of Israel as a Jewish state. What I wanted to do was to hold the principled middle, to work from within, as a loving critic. All of those debates made their way into our writing and our performances.

But in 1985 on a return trip to Israel with an interfaith peace group that presented mostly the ugly of Israel, I disengaged completely. (Here I was, someone connected to Israel whose disappointment was so great that I had disengaged. What about those who never engage in the first place?) It was so traumatic that I had a hard time returning to Israel for my year in Israel for rabbinical school in 1988 and tried to place out of my first year there. But go, I did, and despite my mother’s death during that year, I re-engaged, and fell in love again with the land and people of Israel.

Perhaps it is not a coincidence that I fell in love with and married a man with his own complicated history with Israel. His hinges most deeply on religion and family issues, with politics in the background. While I had been back to Israel three times since my rabbinical school year (not including this visit), Chaim had not been back at all in that same time period. Even in his last visit in the 80’s, he had not visited his mother’s grave as it held such painful memories.

None of this is to imply that aliyah is in the cards for us. It’s not. But it was important for me to reconnect to that innocent place of first love and infatuation with Israel and to hold that alongside my adult engagement with realpolitik.

Writing daily has been an incredibly important spiritual experience for me and helpful as a way to chronicle my time in Israel.

Perhaps it has encouraged those of you who’ve never been to Israel to think about going, to  experience Israel firsthand, not only through the news reports. Israel is not the sacred cow of the right which can do no wrong, nor is it the devil incarnate that the far left might paint. It is, as my friend Ronnie wrote in a comment to my blog, “that complicated, impossible, and necessary homeland that is Israel.” Its very imperfection calls to us to respond, to engage, to commit.

On Saturday, February 9, Chaim and I will be reflecting on our trip after services at CBI in North Adams, MA. Please come!

A number of people have encouraged me to continue this blog. If you are one of them, please let me know if you are particularly looking for something that would be Israel-centered or, if something else, what?

11 thoughts on “My Heart is in the East”