On Friday we arrived in Cadiz, and took a tour bus to Seville, about 1-1/2 hours away. Three operas are associated with this lovely city: Carmen, Don Giovanni, and the Barber of Seville. Though ours was not a tour specializing in Jewish sights as our Barcelona one had been, the walking tour focused a good deal on la Juderia, the Jewish quarter of Seville, focusing on the relationship between the three cultures of Islam, Judaism, and Christianity. It was pointed out that the Juderia was very close to the palace because the Jews (pre-Inquisition) were protected by the crown due to their relative wealth, education, and know-how. The guide, Lola, is herself the descendant of Conversos, noting that her last name — Romero — means “rosemary,” and that the converted Jews discarded their distinguishable Jewish surnames and often replaced them with words for fruits and herbs like Romero, Nanjara (“orange”), Manzana (“apple”), etc. Anyone with nature words as a last name is likely a descendant of Conversos, she said (I have some research to do to verify that!) 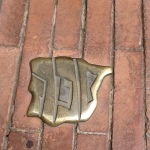 This symbol that says “Sefard” in Hebrew is an indication of Jewish sites throughout Spain. The black space also artistically incorporates the Hebrew word “yizkor” (an imperative meaning “Remember!”).

The large Spanish plaza in Seville, built for the World Expo in 1929, has a magnificent tiled display representing each province of Spain and is the most visited landmark in Seville. While there, I was in the midst of choosing from some beautiful hand-painted fans when the young female merchant hurriedly packed up her wares and ran away — along with scores of other merchants. We saw the police enter the square and realized that there must be regular round-ups of these illegal peddlars. Many of the merchants actually left their stuff behind on the ground rather than be caught with it! It was a sad sight. Julie remarked that these might be Romas (the proper name for gypsies).

Spanish Plaza in Seville — one of the provinces represented by a map on the ground and a tiled representation of its history on the wall behind.

More of the expansive Spanish Plaza

On our tour we also passed the plazas of many other countries that were built for that Expo, as well — the U.S., Argentina, Peru, Guatemala, etc., each unique in its own right. The Plaza of the Americas was actually built by Spain to honor Columbus’s “founding” of the New World. He is quite the hero here in Spain, notably for bringing things like tobacco, coffee, and chocolate back to the Old World.

Of course, we also visited the famed Alcazar, a Moorish palace built for the Spanish King. Again, the three cultures of Islam, Christianity, and Judaism were featured in the design and architecture (all done by the best Muslim architects and artists of the time), with Jewish stars, Hebrew words, verses from the Koran in Arabic, and Christian iconography, all featured. The beautiful gardens themselves cover 18 acres! 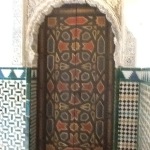 I’m a sucker for shots of beautiful doorways. This is an original wooden door at Alcazar. Everything was exquisitely and colorfully tiled or carved 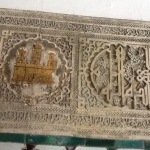 Thanks to the advice of my colleague Rabbi Shira Milgrom, I knew to visit one particular Seville spot off the beaten track during our free time. Julie and I found space #9 in an underground parking garage just outside the Juderia. Apparently the garage was built on top of the community’s Jewish cemetery. Behind that parking space is a glass window display of one of the cemetery’s sarcophagi. May he/she rest in peace. And may the daily parkers in Space #9 (and elsewhere in that garage) know that they park on holy ground. 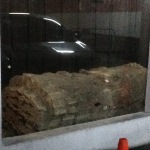 When we returned to the ship it was time to ready myself for the Passover seder. This year is THE year of freedom for me — no Passover cleaning or cooking responsibilities. What a welcome reprieve! We had about 75 seder guests. Most of them were Israelis who had packed their own haggadot and matza (including Mordecai who handed over his handmade shmurah matza for the occasion), not expecting a seder onboard. They were all duly impressed (as I was) by the extraordinary efforts of Holland America to provide such an elaborate (and kosher) seder meal for us. They even had a complete Seder plate for each and every table (over 20!) We had a blast, and I received such heart-felt thanks from everyone who came! 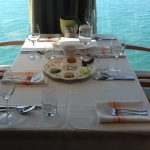 Seder table – note the Mediterranean Sea just outside the window. I was glad to be in a boat and not crossing the Sea by foot, as the Israelites did!

Since Saturday was a day at sea on our return to Barcelona without a port stop, it was truly a day of relaxation. I davenned, walked for an hour around the deck for Holland America’s “On Deck for a Cure” cancer fundraiser, had a massage, swam ( I swam every day this week and was the only one in the pool each time until today), and then in the evening convened an alternative Passover experience (seder “lite”). Julie and I then went to see a late movie (the 4th one I went to this week!)

Julie paid for an exclusive behind-the scenes tour of the inner workings of the cruise ship. All week long, she was asking questions about “how do they this or that?” so she finally had a venue to get all her questions answered! There are 110 chefs onboard, for instance, and our drinking water is desalinated sea water! The captain does far more than navigate — he oversees all departments from guest services to personnel, and she also learned that crew works a certain number of months on before getting a certain number of months off. There is an amazing string quintet onboard who plays on the ship’s Lincoln Center Stage, and Julie (herself a professional musician and founder of an amazing nonprofit called Shelter Music Boston), also was sure to get the scoop on how they got this gig.

Our cabin steward, Joni, creates a different “towel” animal for our room each night. After Seder, we came back and were surprised by this cutie-pie monkey hanging from our ceiling!

It is late Saturday night, the second day of Passover, and the first day of the counting of the Omer. It is both the day and the week of chesed, loving-kindness.  As Julie and I head back to the U.S. tomorrow, may we carry these great memories with love in our hearts. I am so grateful for this opportunity to have travelled to Spain, learned so much, been of service to others, and been in the good company of such an old, dear friend.