1. the act or process of coming together again

2. the state or condition of having been brought together again

3. a gathering of relatives, friends, or former associates

I graduated from Oberlin College on Memorial Day 1982 and just returned from my 30th college “cluster” reunion along with the classes of 1983 and 1984. I believe it was my third reunion return to campus. I went for either my 5th or 10th, and I went for my 25th, as well. The weekend was filled with reunions of all types — reunions with classmates; reunions with a former professor, the Hillel rabbi, and a former staff member with whom I had worked closely; reunions with places of meaning and memory on- and off-campus; and most importantly, a reunion with my younger self. That reunion with self wrought some painful memories and the recognition of some forgiveness and healing work that I will need to undertake with self and others.

I had the honor of delivering the reflections and benediction at the memorial service for those classmates who have died (see the next post, “Reunion Memorial Remarks”). I was humbled by several classmates telling me that that “sermon” was a meaningful highlight for them in its bittersweet rendering of all of our journeys over the past three decades. Though my mandate was to speak to the death of my classmates, I also included mention of Professor Phyllis Jones of blessed memory, who had been my college advisor.

In the fall of 1980, I attended (along with about 14 or 15 other “Obies”) Oberlin’s London semester abroad, a program for junior-year English majors in which we HAD to (poor us!) attend theatre twice a week and discuss that experience in class the following day. That year the program was co-taught by English professors Nick and Phyllis Jones, a married couple with two small and beautiful children, Anna and Christopher. Our classes met in their apartment. Phyllis was my advisor, but upon my return to Oberlin in the fall of 1981 (after I spent another semester away from campus on kibbutz), Phyllis was on-leave due to depression. The summer after I graduated, she committed suicide.

I remember how I struggled for many years with what her suicide meant.  Not yet understanding the nature of depression, I had a difficult time comprehending how it was possible for someone with a successful career, a wonderful and supportive spouse, and young, beautiful children to make such a decision. If Phyllis could do it, I wondered, what might lead me (someone yet unformed, not really happy, with no real focus) to make that decision, as well? She was my mentor, someone I idealized, and it seemed to me that I had to consider that possibility for myself, to put myself in her shoes, to imagine the what-if for myself. I do think that, on some level, that foray into Phyllis’s unknown heart is part of what led me to the rabbinate and particularly to my current career in pastoral counseling. I now walk in a lot of other people’s shoes, empathizing with the pain of their lives.

With my friend Cindy’s suicide in March (which I wrote about in my last blog post on March 15th), I have been thinking again of Phyllis, and even more about Nick. Not only did Nick survive Phyllis’s suicide, but his beautiful daughter Anna was tragically murdered in 1998 by her boyfriend at Bard College.

I had a couple of opportunities to reminisce with Nick during this reunion weekend, to find out what has grounded and supported him through all of this grief. He is a kind and and gentle man, a resilient survivor, happily remarried, and I am so grateful for his friendship. He reminded me that he had written me a letter of recommendation for rabbinical school.

Chaim joined me on this adventure to Oberlin, as he did for my 25th reunion, falling in love with the campus and the idea of Oberlin, coming to understand the value of a residential college (an experience he didn’t have) and of a small liberal arts college where I was really known and seen. We walked a lot both on-campus and all over the beautiful town of Oberlin, visited with a number of friends (a particular shout-out to Sandi Jo and Beth!), attended symposia, and listened to a lot of concerts (Oberlin has a world-class conservatory and we heard graduating seniors who knocked our socks off on a variety of instruments).

Sunday night of reunion/commencement weekend, unless it rains, is always memorable and beautiful — called Illumination Night, hundreds of Japanese lanterns are strung up in Tappan Square, with live music and homemade pie, an event attended by Oberlin residents, graduating students/families, and alums. 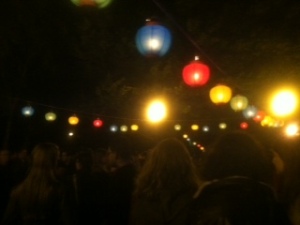 Oberlin is truly a unique and wonderful school. Though my nephew Steven will be attending UMass Amherst in the fall, I have a dream of my nieces Hannah or Sarah or my nephew Marcus attending there… and offering me more opportunities to visit this beloved and special place!

In speaking with Nick, Chaim analogized my attachment to Oberlin with that of the Hebrew poet Judah haLevi to Eretz Yisrael. HaLevi wrote that he was in the west (Spain) while his heart was in the east (Eretz Yisrael); Chaim commented that I am in the east (New York/Massachusetts) while my heart is in the Midwest (Oberlin). Chaim is only partly right — like HaLevi, my heart is also in Eretz Yisrael, but also in a number of other places.

I have had the good fortune to have a lot of different homes in my life — some were just physical places where I lived, but most were true spiritual homes. It is only in retrospect that I realize just how spiritual a home Oberlin was for me and how meaningful it was to return.

Chaim and I drove the nine hours each way to/from Oberlin listening to Barack Obama masterfully read his memoir Dreams of My Father (I listen to a lot of books on tape both for for 30-minute drives to work and on my drives between NY and MA, and he is truly a superior reader — dramatizing different voices effortlessly). That choice of reading material felt appropriate for the journey at hand: for Obama was writing about reuniting the facts and fictions of his father, as well as about ultimately reuniting with the Kenyan side of his family after his father’s death. In the book, he commented about Kenyans who have a home in the city but also keep a modest home on ancestral rural or village land. This second home is called “home-squared” (as in “home to the second degree”).

I have been thinking about that today, homes and homes-squared. As Chaim and I work out whether NYC or western Massachusetts is ultimately “home” and what role Israel will have in our lives moving forward, I add to the mix New Jersey (where I was born and bred), Oberlin, OH, Santa, Cruz, CA, where I truly came of age after college, and Boston, the other significant depots on the journey of my life.

All weekend, I kept thanking my parents, of blessed memory, for allowing me to attend Oberlin. It was a big financial investment for them, and while I took it for granted then, I am eminently grateful now. Thanks, Mom and Dad! 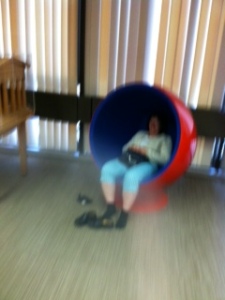