The Central Conference of American Rabbis (CCAR), my rabbinic organization, sponsored a social action trip to Israel this week, and today Chaim and I tagged along. There were a number of colleagues I knew and haven’t seen in years, so even just the socializing part of it was lovely. More importantly, the day was one of the most fascinating and educational of the trip so far (or do I say that every day?)

We began at 8 AM at the Mamilla Hotel, where Professor Reuven Hazan of Hebrew University debriefed the Israeli election for us and helped paint some scenarios that may unfold in the coalition-building process that will take place over the next several weeks. One of the facts he shared that proved important for the rest of our day (which we spent in the Arab town of Tira) was that 50% of Israeli Arabs don’t vote because they feel so disenfranchised. Since Israeli Arabs account for 20% of Israel’s citizens (we are talking about Arabs who live within the Green Line, not those on the West Bank who are not citizens and therefore not eligible to vote), this is a population that could make a real difference in elections, if tapped. Unfortunately, the mainstream parties don’t address Arab issues in their platforms even when they have Arab candidates on their slates (both the Labor and Meretz parties, for instance, will each have an Arab member in the new Knesset). The Arab parties that do exist are never invited into coalitions of either the Doves or the Hawks, they are considered too outside the mainstream (either Communist or Islamist). As a result, many of Israel’s Arab citizens don’t see the use of voting. It hasn’t served them yet.

Within the Green Line of Israel is an area called the M’shulash/Triangle, a concentration of Israeli Arab towns and villages. The Arab Israeli city of Tira that we visited today, with a population of about 25,000, sits in the Triangle. Because today was Mohammed’s birthday and therefore a Muslim holiday, some of the people we were to meet with were not available. But what interesting people we did meet! I particularly want to focus on the three Arab Muslim women we met: Mariam, Ranin, and Dalia, as well as one Jewish woman, Yael, and one Jewish man, Avi.

Seven years ago the Interagency Task Force on Israeli Arab Issues, a coalition of American Jewish groups, was formed. The coalition includes all the heavy hitters of the American Jewish world: UJA Federation of NY, the Joint, the Conference of Presidents, the ADL, all three major religious movements, the New Israel Fund, etc. The thinking was that if American Jewry cares about Israel, we must also care about Israeli Arabs, where there are big gaps and discrepancies in education, housing, and employment opportunities between Israeli Arabs and Jews. Currently, the Israeli government is also investing more in Arab- Israeli communities in order to close these gaps.

Our trip today was meant to introduce us to some of the local agencies on the ground that are part of this gap-closing effort.

Yael Kahan Sharon of Kave Mashve (The Equator), Mariam Kabha (a lawyer for the EEOC), and Avi Fleischer of  JDC Israel

First we spoke about economic development, labor issues, and job training for Israeli’s Arabs. Mariam Kabha is a lawyer for the Israel’s Equal Opportunity Commission, which is housed under the Ministry of Trade and Labor, who fights discrimination in the Arab work force. She showed us an anti-discrimination commercial that appeared on Israel TV recently, under the auspices of Prime Minister Netanyahu’s office. Apparently, the fact that the problem is in the public discourse now is due to the fact that when Israel got into the OECD in 2010, one of the conditions for membership was to get more Arabs and ultra-Orthodox Jews into the labor market and out of poverty.

Mariam also spoke of successful court cases that were brought to court and won on behalf of Arabs who were discriminated against in the workplace. There was one case of 130 Arab men who worked for the IRC (Israel Railway Company) and were let go because of an arbitrary new condition for employment: military service. (Israeli Arabs are not obligated to, but may, serve in the Israel Defense Force; those who do voluntarily serve are often considered traitors in their communities since one’s service would likely include fighting/controlling one’s co-religionists on the West Bank.) Mariam brought the IRC discrimination case to court, and this condition for employment was dropped. But she emphasized that until this commission was established in 2008, cases like this were rarely brought to court because there was no mechanism for bringing or addressing such grievances.

Yael of Kav Mashve/The Equator spoke about her NGO and its mission of getting more Arab university graduates into the private business sector and what some of the obstacles are. She trains Israeli recruiters about cultural differences and how to interview Arab candidates. For instance, a typical interview question might be “Tell me about yourself.” She explained that in the Arab culture, one’s “self” is indistinguishable from one’s family. A Jewish interviewer needs to understand that the answer they will likely get to such a question will be a recitation of family members and what they do.

Since Arabs generally stay put in the town or village where they were born and maintain the extended family relationships there, they are not a people that will move because of a job. This, too, is an obstacle to entering the job market. (Housing is another real issue for the Arab-Israeli community. The communities are becoming more crowded since people stay where they grew up.)

Avi of the JDC spoke about the employment centers that the JDC has opened in Arab communities and how they work with specific communities that are particularly in need of employment opportunities. One successful case of creating employment was that of a Bedouin village, Hura. The women couldn’t leave the village because of family obligations and because of lack of transportation (the lack of transportation in Arab and Bedouin villages and towns is a huge obstacle to employment, we discovered). So the JDC partnered with Bezeq, the Israeli phone company, which was in need of call centers around the country. Bezeq now employs 60 Bedouin women in Hura (in the local mosque!) who take troubleshooting and service calls from customers around the country. (When my friend Bili called for Internet help for me when I first arrived, she spoke with a man named Max, but it could just as easily have been one of these Bedouin women).

Ranin spoke about being at the university to study Hebrew literature (she is particularly in love with the Israeli writer, Agnon! — a very Jewish writer). She thought she’d become a teacher as many Arab women do, when she fell in love with technology and computers. She moved up into a high position at an Israeli bank, but then when she had her first child, she realized she could no longer travel to Tel Aviv for a job. When Appleseeds opened in Tira, she got a job there, a community center that offers free internet access, technical and vocational training. She considers technology “the door to life” and is passionate about giving kids and women the skills they need to enter the job market. 47% of the women they have trained have been employed. 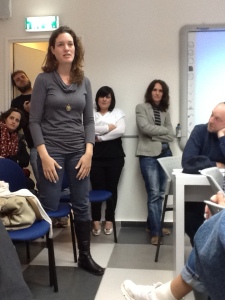 After lunch, our agenda moved from the topic of employment to the topic of education. We met with Dr. Dalia Fadila, an educator who is currently the provost at Al Qassemi College, in addition to being the founder of the Q Schools. I wish you could have been there to be inspired by her, too. She told us her story of feeling victimized as an Arab woman, but how two of her professors at Bar Ilan University helped her on her road to empowerment. She studied the literature of American minority women: Jewish-American, Asian-American, and African-American as a way to turn the lens on herself and understand better her own experience as a minority in Israel.

Dalia gave us the dire statistics of Arab education and spoke of the tension in her community between modernity and tradition, and how women who enter the job market must still maintain their roles as wives and mothers at home (which echoed the personal story that Ranin had told about leaving her important bank job when she had a child). She also spoke of the different self-definitions that Arabs in Israel use and how politicized the issue is: while Jews will speak of Israeli Arabs or Arab Israelis, many Arabs in Israel prefer to be called Palestinians living in Israel or Palestinian Arabs or Palestinians within the Green Line, etc.

The Q Schools that Dalia started are after-school and weekend programs to teach English (her 15 year old son is fluent, if that’s any proof of its success), but she sees the English as a means to the ultimate goals of personal development and empowerment, leadership, and communal responsibility. She has some funding from the government, but more comes from a foundation as well as from the US Embassy.

She has written her own (BRILLIANT!) textbooks that teach values, analytical skills, and creative thought as the primary goals, all through the guise of teaching English, which is merely the secondary goal.

Chaim asked Dalia about the Arab-Israeli writer Sayed Kashua, who happens to be from Tira. (Kashua wrote Dancing Arabs and Second Person Singular — I highly recommend both — which deal a lot with issues of Arab identity, Arab-Jewish relations, and trying to “pass” as a Jew. He also writes a humorous column in Hebrew in HaAretz and is the creator of the hit Israeli TV series Arab Labor.) She said that his parents still live in Tira and that there is a lot of anger in the community at Kashua for airing “dirty laundry.”

So we come back to the beginning. When Professor Hazaz spoke about low voting rates in the Arab-Israeli community, we can see how it all connects to the lack of opportunities. Once the Arab-Israeli community enters the job market and the educational system in greater numbers and feels more part of the larger society, I imagine they will vote in greater numbers. We can only hope that the efforts now being made by the government, by NGO’s, and by the American Jewish community to invest in leveling the playing field will ultimately pay off in creating a more just and democratic society for the Arab citizens of Israel.