Today is Election Day in Israel. (Chaim wore his “VOTE” t-shirt and was disappointed that no one commented on it.) Since voting is considered such an important civic act here, today is a national holiday. Hospitals and public transportation, for instance, run on reduced schedules. Most public institutions are closed, and only those whose jobs provide essential services are required to work on Election Day. Israeli labor law then requires that they receive either a paid vacation day to make up for it or 200% pay for the day (double their normal day’s salary). Even more interesting to me is that anyone who finds her/himself 20 kilometers away from home on Election Day can receive free public transportation to get home to their polling place by presenting their official identity card. (I learned all of this from today’s Ha-Aretz article entitled “Election Economics: Labor Law on Voting Day”.)

Don’t you think it is time to make Election Day in the U.S. a national holiday like this?

All this is to say that Bili chose not to work today so that some of her staff could make the extra money. Therefore, she was free to take us on an outing to the Dead Sea, the lowest place on earth and one of her favorites. On our way there, we saw lots of desert, some areas of palm trees, and a few Bedouin villages and camels. We passed Qumran, the caves in the desert where the Dead Sea Scrolls were found (and where I almost died of thirst on a hike in 1981), as well as a place called Nabi Musa (“Prophet Moses” in Arabic) which is where Moslems believe that Moses is buried. This is in contrast to Jewish tradition which doesn’t identify a specific place for Moses’ burial place since our text reads and no one knows his burial place to this day  (Deuteronomy 34:6).

Once we arrived at Mineral Beach on the Dead Sea, we were each given a voucher for a free coffee and pastry at the cafe in honor of Election Day! Eizeh kef — a great expression meaning, Wow/What a surprise/What fun! (Since it’s not my holiday, I chose to drink my free coffee in honor of this 40th anniversary of Roe v. Wade.)

Chaim and I standing at a spot on Mineral Beach that is 422 meters below sea level.

We had such a wonderful and relaxing day there. First we went into the hot sulfur pool before heading down to the beach.

Dancing the hora in the sulfur pool

Here I am floating in the Dead Sea, while my flip-flops walk on water!

I float, and my flip-flops walk on water in front of me

In addition to the hot pool and the Dead Sea, tubs of mineral-filled mud were available for spreading. My skin is SOOOO incredibly smooth right now, I can’t even describe how luscious it feels. The Dead Sea is considered such a healing place that people come from around the world in order to treat their skin for acne, psoriasis, or other skin ailments. In fact, Bili told me that her insurance plan allows her to take two weeks a year AT A HOTEL at the Dead Sea to treat her psoriasis.

Don’t you think it’s time that our insurance plans in the U.S. were as forward-thinking and generous as this?

The new improved me!

The problem with the Dead Sea is that is shrinking. Where I am standing in this picture was covered in water 30 years ago when I first went there. (Actually, even where Chaim and I are standing in the first photo was underwater then, much further from the beach). The Dead Sea is being mined not only by beauty products’ companies like Ahava for the minerals (soaps, bath salts, etc.), but also by pharmaceutical and chemical companies. This is an environmental disaster in the making. 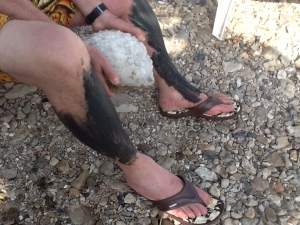 We returned to Jerusalem at around 5 PM, just in time for me to meet with one of the social workers who had attended my presentation at the Reshet last week. She said she realized that she needed some spiritual care herself and doesn’t know anyone here (except for her professional colleagues who feel too close for comfort) who might be able to offer it to her. I was honored to be able to sit and listen to her sacred story and to help her identify the spiritual issues that she is dealing with in her life.

It is now past 9 PM here and only some of the polls have already closed, as far as I understand. At 10 PM, the news can start reporting on exit poll results, though final results won’t be available until a couple of hours after that. You will certainly have the news before I can post anything tomorrow evening from here.

Today was a respite day for us, as we have three intense days ahead of us before Shabbat (we head to the airport and home just after Shabbat on Saturday evening). Tomorrow we will be taking a tour of the S. Hebron Hills (in the West Bank) with a group called Breaking the Silence. On Thursday we travel with the CCAR (my rabbis’ association) to meet with Arabs within the Green Line, in what is called the Triangle region. And then on Friday we go back to the West Bank with Rabbis for Human Rights to plant trees in honor of the holiday of Tu B’shevat/Jewish Arbor Day.  I am tired just thinking about it, but I suspect that these are going to be among the most meaningful days of our trip.

6 thoughts on “The Lowest Place on Earth”