After attending our early morning Comic-tary Torah study in which we discussed such important topics as miracles, faith, memory/forgetting, and whom among the Biblical characters in this week’s Torah portion B’shallach (Moses, Miriam, Pharaoh, God, Amalek, Joshua, Aaron, or Hur) would we vote for if they were to be on Tuesday’s ballot — Chaim and I headed to the impressive Israel Museum for a day of art appreciation. On our way, we passed this amazing 5th century monastery of the Greek Orthodox Patriarchate, the Monastery of the Holy Cross. Fifth century! 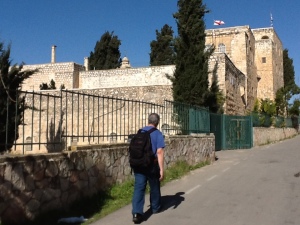 The Israel Museum is one of the leading art and archeology museums in the world. We were also on a mission to find a small exhibit of work by a landscape artist named Israel Hershberg whom our artist friend Pattie asked us to check out, since they had both exhibited in a show together once.

Knowing we couldn’t see everything in one visit, we skipped the archeological exhibits, the medieval church art, all the European art (the Impressionists,  the Surrealists, the post-Moderns — which meant rushing past Monets, Picassos, Van Goghs, Gaughins, Magrittes and Dalis as if they were flotsam in our path) in order to view the expansive collection of artifacts of Jewish ritual life from around the world, as well as to focus on the Israeli art.

The Jewish Life and Art Wing reminds those of us in North America, that the Jewish world is a lot bigger than the Ashkenazic Jewry that we are typically exposed to and that we think of as mainstream. The Jewish artifacts from Yemen, Morocco, India, Iraq, etc. made me realize the extent of my ignorance of much of Jewish culture. For instance, if you thought (as I did) that blue and black-striped tallesim were “traditional” and that colorful prayer shawls were contemporary inventions, think again. These three red examples are from the 19th and early 20th centuries in Morocco (left), Yemen (right), and Bulgaria (bottom). 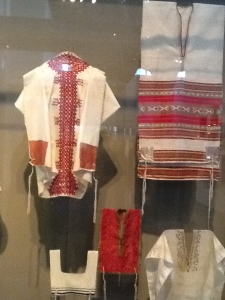 The Israel Museum has saved several sanctuaries from around the world for display — one from Cochin, India, one from Italy, one from Germany, and one from Surinam. Here is just the entryway from a Moroccan synagogue in which you can see the Moorish design. 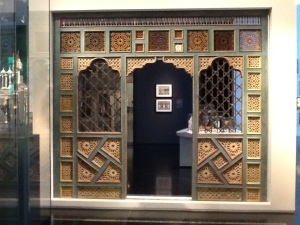 I did a lot of ooh-ing and aah-ing today, but nowhere moreso than of the silverwork of Ludwig Wolpert and David Gumbel, both of whom taught at the New Bezalel School of Arts and Crafts in Jerusalem.  The school was named after the biblical Bezalel who was the craftsman for the Tabernacle. God says of Bezalel (Exodus 31:3-5) that “I have endowed him with a divine spirit of skill, ability, and knowledge in every kind of craft to make designs for work in gold, silver, and copper, to cut stones for setting and to carve wood — to work in every kind of craft.”  Both Wolpert and Gumbel were definitely endowed with divine spirit. Both were also influenced by the Bauhaus style (I posted on Thursday about Bauhaus architecture in Tel Aviv’s White City), and according to the Musuem literature “were among the first to adapt the modern style, characterized by clean, flowing, and functional forms, to the design of Jewish ceremonial objects”. 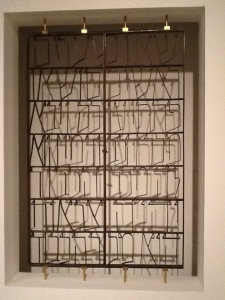 Doors to a Torah Ark (Wolpert) that read “Lift up your heads, o gates! Lift them up, you everlasting doors, so the King of Glory may come in!”” (Psalms 24:9)

One of the most interesting pieces of modern art was this piece called Yom Kippur Flotilla. Why Yom Kippur? If you look closely, you can see that the boats are made out of shofarot/rams’ horns, both whole ones and pieces of them. Shofarot are blown at the end of Yom Kippur (as well as on Rosh Hashanah and throughout the month leading up to Rosh Hashanah). 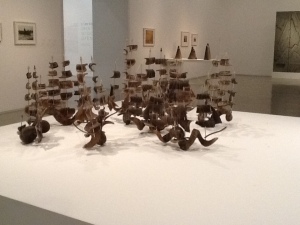 Another interesting piece was this triptych by Mordecai Ardon, who is not himself religious but who uses religious imagery in his paintings. Note the mystical sefirot represented on the left (the Tree of Life symbolizing God’s emanations), the foundation stone of the Temple on the right, and what look to be ladders reaching between heaven and earth in the middle. 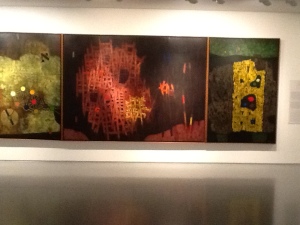 The Israeli art exhibit, of course, also reflects the changing ethos of Israel — from a collectivist ideology to individualism, from disdain for religion to an embrace of it,  from a focus inward on particularistic Jewish concerns to a focus outwards towards the Other. We watched a short and mesmerizing film about the changing face of art in Israel that helped contextualize the exhibit historically and sociologically.

Outside of the museum, in addition to gorgeous views, is a wonderful sculpture garden. When I saw this piece, I immediately thought of The Bean in the Millenial Park in Chicago, another polished stainless steel structure that is meant to be mirror-like. Sure enough, when I came home and Googled, I found that Anish Kampoor was the artist of both. He is an Indian-born British artist who used to live in Israel, born to a Hindu father and a Jewish mother (whose family had immigrated to India from Baghdad — there is a still a Baghdadi Jewish community in India). 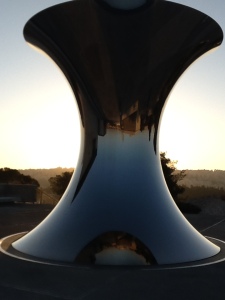 This evening I met with an HUC rabbinical student who contacted me after I taught there last week, seeking some advice and counsel. Her concerns, her doubts, her fears brought me back to my own rabbinical school days of uncertainty, questioning and doubting. I hope I allayed her fears — she seems to be exactly where she needs to be, doing exactly what she should be doing.

May that be the same for all of us — that we find ourselves exactly where we need to be, doing exactly what we should be doing. Amen!