“If you are considering an abortion, Stop! Do not end a life because of money.”

Because I don’t have the time or patience to read the newspaper cover-to-cover, I have a personal reader. His name is Chaim, and when he reads the papers (whether here in Israel or at home in the States), he cuts out the articles that he thinks I must read or that I would be most interested in. Most of the time, he makes good choices. One of the themes he knows always to clip are articles about reproductive choice and abortion restrictions (or victories) around the world.

So it was that I learned about an Israeli anti-abortion organization called Efrat that just won the Jerusalem Prize, an annual award sponsored by right-wing paper Batsheva.  An editorial in Ha-aretz on January 4 alerted me to the fact that this organization uses pressure and propaganda tactics not unlike those of the right-wing Christian pregnancy crisis centers in the U.S. But in Israel there is a nationalist agenda “to encourage birth in the Jewish nation” that further complicates the issue of a woman’s right to choose, in addition to a very family-centered society in which the choice to not have children is laden with heavy societal disapproval. Women who already feel guilty about contemplating an abortion are ripe victims for an intimidating organization like Efrat.

On January 8, Ha-aretz again reported on the Efrat organization, this time about Orthodox Rabbi Benny Lau’s scathing attack on Efrat in which he affirms that “the slogan ‘abortion is murder’ is neither rabbinical law nor Judaism.”

As many of you know, I have been a passionate advocate of reproductive choice and abortion rights since my early 20’s. After college, I moved to Santa Cruz, CA, where I received training as a health counselor through the Santa Cruz Women’s Health Collective. I became the coordinator for pregnancy counseling there, a volunteer position, and also was a member of the newsletter committee, which produced a feminist health newsletter 4 times a year that was sent (and read) internationally.

In addition to my work at the SCWHC, I held a paid position as an abortion counselor and medical assistant at a different clinic. I would counsel the women when they entered the clinic, and I was with them throughout their abortion procedure, holding their hand, as well as assisting the doctor. We were often picketed at the clinic, even then, which was 30 years ago. Some of the doctors were called at home and threatened; some of them couldn’t hack it and left the job.

Most will assume that my feminism and social activism were nurtured at my alma mater, Oberlin College, not only the first coed institution of higher learning, but also the first to accept African Americans, where progressive politics, feminism, and activism still reign supreme. And that would be true.

But my specific interest in reproductive choice grew out of an experience I had in Jerusalem in 1981.

After spending my fall semester 1980 in London, I travelled in Europe, mostly by myself, and then took a boat from Italy to Greece to Haifa. I planned to finally meet my longtime penpal Bili and her family in the flesh and then to go to a kibbutz for ulpan, an intensive Hebrew program.

Things weren’t quite so simple. It turned out that my seasickness on the boat was more than seasickness, and that I had arrived in Israel pregnant. Thanks to the counseling I received at Shilo (an organization not so different from the SCWHC where I later worked), I had an abortion at Hadassah Hospital, and was soon on my way to kibbutz.

The process included my being interviewed by a social worker who brought my case to a committee of 3, herself and two doctors, who determined that an abortion in my case was appropriate. Indeed, they could have said no, and there is no such thing as a private abortion in Israel. (Shockingly, married women under the age of 40 in Israel cannot get an abortion unless there is a health reason for self or fetus, there is an emotional reason — for which a psychiatrist must sign off — or if the pregnancy is not her husband’s. It is commonly accepted in Israel that a woman’s job is to bring babies into the world and to have a family. I remember the waiting room at Shilo in 1981 and my surprise that there were ultra-Orthodox women there. Now I think: Thank God there were ultra-Orthodox women who loved themselves — and the children they already had — enough to be there.)

So the Efrat news story upon my arrival in Israel this trip truly got me in the kishkes. I realized I had no idea what the whole story was concerning abortion rights in Israel today. Not only that, I had a debt to repay to Shilo. Big time. I teach about gratitude/hakarat hatov practice all the time with my students and clients. So I emailed Shilo and asked if I could come to meet with them while I was still in Israel.

In 1981, as a 20-year old American on her way to a kibbutz ulpan, I arrived pregnant in Israel. I was fortunate enough to be connected up with SHILO, had an abortion at Hadassah Hospital, and then was on my way to the kibbutz for several months, and then back to college in the U.S.

I became active in reproductive rights work in the US, serving as a pregnancy and abortion counselor in two different clinics in California, and actively volunteering for (and financially supporting) organizations such as NARAL New York and Planned Parenthood in the US.

I am now a Reform rabbi, and though I have been to Israel many times since 1981, I have never come to thank you for what you did for me so many years ago.

I have been concerned about the situation here as I read about the Efrat organization. Their tactics sound like those of right-wing Christians in the US. Might it be possible for me to come and meet with someone to find out more about the situation? I will be in Jerusalem until January 27.

many thanks and many blessings to you all,

So, this morning I met with Orli, the executive director of La-da’at Livchor Nachon (Choose Well), formally Shilo. I learned so much in our conversation about abortion in Israel, the mission of the organization, the incredible work they do on a shoe-string, and most important of all, that helping them raise money to do their important work is my new mission. (Jane and Miriam, are you reading? Jane and Miriam are spiritual director friends who have stood by my side as I’ve tried to discern what my truest tikkun olam/social action project in the world is meant to be.)

The Jewish women in my life are generally pro-choice women who understood in the last few elections that it truly mattered that we would elect a Democratic president in order to protect the Supreme Court and Roe v. Wade. We care about this issue and we vote with this issue in mind.

So I appeal to those who are reading and care about this issue and care about Israel to help me in this mission, either financially or with leads to potential funders or with media/advocacy expertise. Israel does not have the kinds of advocacy organizations (like NARAL Pro-Choice) that we do. La-da’at Livchor Nachon has old medical equipment, they desperately need to be able to fund an advocacy/media staff person who can respond to Efrat effectively and bring the issue of reproductive choice and a woman’s right to choose into the public eye in a consistent way. They need money for ads in Arabic, Amharic, Russian, English, and Hebrew, since they need to reach more women (right now it’s primarily through word-of-mouth). They no longer have money to hold sex education groups in East Jerusalem (the Arab section of the city). If you are in a position to make a donation of any size, go to their website to see what they do and become a supporter. http://www.shilo4u.org.il/english.htm  THANK YOU!

The White City (The Levin House, considered one of the best renovated examples of Bauhaus architecture in Tel Aviv)

After my morning meeting with Orli, Chaim and I took the bus to Tel Aviv. From the bus station, we walked to the Yemenite Quarter and had lunch, walked through the Carmel market/shuk, and then took a walking tour of the White City, trying to locate certain Bauhaus houses that our guidebook considered worthy. Bauhaus was one of the first modernist movements in architecture, and these houses were built in the 20’s and 30’s by followers of the German Bauhaus/International Style. I also had the most amazing ice cream at a place called Iceberg’s (this was the first dessert I’ve had since our first Shabbat in Israel — I do think I’m losing some of the weight I had hoped to!) 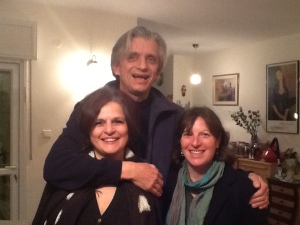 When we got back to Jerusalem, we walked the couple of blocks to the Israel Broadcasting Authority where Bili works. She gave us a tour of the recording studios and showed us the multi-million dollar project she is overseeing, which is digitizing all of the IBA’s archives in conjunction with Harvard University, who will have access to them. Bili then brought us home to her house for dinner, where I got to see (and Chaim got to meet) her husband Mats, who is just back from his trip to Sweden.

(Susan and Stanley: We’re sorry we didn’t make it to your friends’ concert tonight!)

Another fascinating day thus comes to an end.

2 thoughts on “Abortion in Israel and my new mission”